Get Your Kids in Sports! 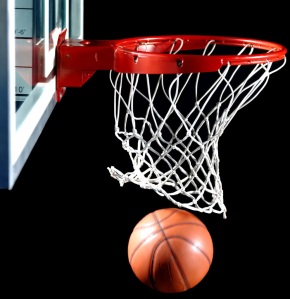 This year my daughter, Maia joined the Steve Nash Basketball League. After a number of years playing baseball, which doesn’t require much running and soccer, where she played in goal a lot, I was thrilled that she was wanting to play a sport that required more extensive cardio. When I learned that she would be playing on a team with mostly boys I was concerned about how much she would like it. Like her father, she was not born with much in the way of “natural” athletic talent so I was wondering how her confidence would be affected. Everything both of us have ever accomplished in sports has been earned through practice and determination coupled with an acceptance that it’s okay not to be the best kid on the team. I’ve always told her, as long as you bust your butt and contribute in the best way you know how, you have fulfilled you part as a teammate.

Along with so many others, I believe that playing team sports as a child is one of the most crucial life experience building blocks that you could ever provide your child with. Now I am not a doctor or psychologist but here is a list of reasons why you should make team sports part of your child’s life.

The team my daughter played for was extremely fortunate to be coached by two very talented individuals who both seem to enjoy every last minute they spent with the co-ed team of 12 year-olds. With their passion and knowledge of the game it quickly became clear to me that this was the best possible scenario for my daughter, as this was her first year playing basketball and she knew very little about the game. The husband and wife dynamic duo were super supportive and gave Maia the confidence she needed to compete. Every game she played in she got a little bit better and a little bit more confident. At the beginning of the season her skills were limited and she made many mistakes but she was busting her butt and giving 100% every game and that made me proud. She looked forward to every practice and game with amazing enthusiasm. As the season came to a close her abilities had improve substantially along with her confidence!!

Her team finished tied for first over all during the regular season with a 10-2 record. They then played a two game playoff and lost their first game in a thrilling overtime match-up that had all of the parents on the edge of their seats. Tonight was the final game and they won in convincing fashion, finishing 3rd in the league. For many of the kids this is it for the season but Maia was given an opportunity to continue on for another month with an all girls team and she jumped at it. This was music to my ears as it proves she wasn’t just in it for the boys! Thank you to Coach Mike and Coach Christine! You guys are awesome!

A Day to Remember

The title on this one might be  a little misleading. About a month ago I discovered a band that I just can’t seem to get enough of these days. Now granted, their style of music isn’t for everyone and as you will see over time, I am into a wide variety of musical genres. As an avid runner that requires high tempo music to stay at a good pace, bands like this find themselves in heavy rotation on my play list. What I enjoy most about A Day to Remember is their unique ability to blend the lines between heavy metal, punk and pop music, while writing catchy lyrics and making some humourous videos. My favourite song by them so far is Downfall of us All. Enjoy!