On a recent visit to Costco I realized something that really made me shake my head. With most of the world in a heightened mindset of environmental awareness, where some consumers will pay more for products that are deemed eco-friendly, Costco has made some great strides. They have reinvented their detergents, baby-care products and their Kirkland brand household cleaners to be easier on the environment as well as making their packaging more eco-friendly.

All that being said, why is it that, with all of their buying power, huge inventory of products and emphasis on a greener image, would they give you a complimentary cup of coffee in a non-biodegradable styrofoam cup and give you a full size plastic spoon to stir in your cream and sugar. Why not a biodegradable cup with a wooden stir stick? Seriously! I’m no tree huggin’ environmental activist but this is a real no brainer isn’t it?

I shared this link with the good folks are Costco and they seemed some what surprised about this. They asked me when this observation occurred, which location, what time of day and inquired as to whether it was someone sampling. I filled them in on all the details and they were quick to respond again to tell me that my blog posting was being sent to the managers of the Langley location to address. Crossing my fingers that next time I go to Costco in the morning they will still be offering complimentary coffee. Only in a more environmentally sustainable fashion! 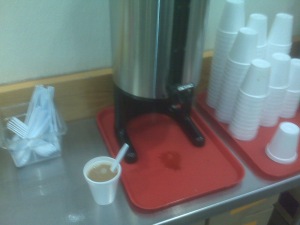 I was hoping that I would receive some correspondence from management at Langley perhaps thanking me for pointing out such an obvious environmental faux-pas but I did not hear anything. So this past Sunday I went shopping at Costco in Langley and was eagerly waiting to see if my suggestion had been considered by the management. Well, I am sad to say it had clearly fallen on deaf ears. This honestly blows me away. Such a simple fix at next to no cost difference.

Today I received a phone call from the general manager of the Langley Costco branch. He wanted to let me know that he had received my letter and that he is currently in the processes of sourcing out a greener alternative to the styro foam cups and plastic spoons. He said he had been in discussions with the Vice President of Costco in Canada about his challenges in finding a cup that truly is as “Compostable” or “Biodegradable” as it claims to be. Apparently many of the take out containers out there that claim to be “green” are not thanks to a lack of a governing body that polices each individual companies claims. He said that a company as big as Costco must make absolutely sure they are changing to a product that is what it says it is. Which totally makes sense. He said that Costco is also looking at changing the takeout containers and cutlery that they use in their concession in an effort to move forward with a green initiative. Although the call came over a month after my initial contact I am extremely pleased to hear that the powers that be are giving this some serious consideration. Hopefully this story will have a happy ending after all is said and done!

Well, well, well, colour me impressed! It gives me great pleasure to share with everyone that on my visit to Costco today I was grinning from ear to ear when I helped myself to a complimentary coffee in a fully compostable, recyclable and biodegradable cup and then stirred in my Splenda with a wooden stir stick! The cup they are using is one that I suggested to the manager in my discussion with him back in March. Way to go Costco and thank you for listening to the voice of your customers!

This entry was posted on January 23, 2011 by The Craft Beer Tourist. It was filed under Environment, My Opinion and was tagged with costco, environmental, green.